However, there will be times when one is forced to move to Schitt's Creek, where these prized sparklers can't be found. Or perhaps one's wallet is feeling light this year, but the festivity must go on. Be of good (holiday) cheer, you do not have to resort to Zhampagne. There are yummy sparklers made via méthode champenoise that will not break the bank.

First, let's delve into this multi-step process to make Champagne.

Champagnes go through two fermentations. In the first fermentation, the yeast turns natural sugar in the grapes to alcohol, creating the base wine. This is then bottled with some liqueur de tirage, a mixture of wine, sugar, and yeast, which then kickstarts a second fermentation. This time, carbon dioxide, a fermentation bi-product, is trapped in the bottle and will eventually be released in tiny bubbles for the special occasion.

After the second fermentation, the bottles are then aged with the remaining yeast particles, known as the lees, for at least 15 months. This prolonged contact allows the wine to develop a creamier and fuller texture with a nutty bready aroma.
When aging is complete, the bottles are held at 35° in special racks called pupitres. Every day or two, the bottles will be lightly shaken, turned, and put back in the rack at a gradually increasing angle. This process is called riddling or remuage.
After a few weeks, the bottles will be virtually held upside down. The lees will settle in the neck of the bottle to be frozen and removed via a process called dégorgement.
Finally, the bottle is topped up with liqueur d'expédition, usually a mixture of base wine, sucrose and sulfur dioxide, to balance and stabilize the wine. A cork is then secured in place with a wire cage.
Viola! That concludes the process that is known as méthode champenoise, also known as the traditional method.
Other than Champagne
While elaborate, méthode champenoise is well-practiced outside the Champagne region. Even within France, there are sparkling wines that are produced in the traditional method. The famous ones are the eight appellations of Crémant; namely, Alsace, Jura, Bourgogne, Savoie, Die, Limoux, Bordeaux, and Loire. Compared to Champagne, the rules for making Crémant are less stringent, particularly in the length of time spent aging on the lees. What you may lose in flavor profile, you gain in price point.
The European bubbly that is often lauded as the closest thing to Champagne, however, is the Spanish Cava. And at a fraction of the price! Here's a fun fact, the largest producer of traditional method sparkling wine is Freixenet, headquartered in Saudurni d'Anoia, Spain. Personally, I am partial to Cava as it brings back fond memories of our Christmas vacation in Barcelona several years ago.
On the other side of the pond, many Champagne houses have opened their satellite wineries in the likes of Napa, Sonoma, and Willamette, affording us the expertise of the best in French sparkling winemaking. However, not to be overlooked are producers in less known areas like Washington and New Mexico. But before you grab a bottle from the grocery store, make sure that the label indicates that the bubbly is made in the traditional or Champagne method.
Other than Zhampagne
Now, if a bottle of Champagne is not within your reach, I have a few recommendations for Champagne-style sparklers this holiday season!
Flama d'Or Brut 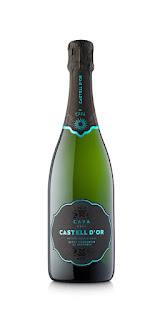 So here you go! No need to resort to Zhampagne. Here's to a sparkly bubbly holiday season. Cheers!
Posted by Adrienne at 10:03 PM No comments: