A last-minute change in travel plans recently landed us in Beaune, a historic French town and the wine capital of Burgundy. I was ecstatic, and Beaune didn't fail to impress. At the heart of the most celebrated wine country in the world, Beaune also has five Michelin star restaurants. It's a haven for wine geeks and foodies, and a danger to your wallet.

Allow me to tempt you to visit Beaune with a few highlights of our trip:

As you take a stroll in Beaune, it is hard to miss the beautiful Flemish-style architecture in the town square. That is the Hospices de Beaune, a hospital founded in the 15th century to provide free medical care to the poor. The hospital continued to be in operation in the same building till the 1970's when the services were moved to a modern facility. A tour of the Hospices de Beaune is a treat, where you get to see how it was run several hundreds years ago.

The Hospices de Beaune is also known by some as the winemakers' hospital. Over the centuries, the hospital has received different donations, including vineyards, to support its mission. Today, the hospital owns about 60 hectares of premium vineyards.

In 1859, a tradition of auctioning wine from the vineyards to raise money for the hospital was started. The wine auction is held on the third weekend of November (also known as the Les Trois Glorineuses). A portion of the proceeds still go for the care of the sick as well as the modernization and maintenance of the hospital today. The wine will be auctioned primarily in barrels to private and professional winemakers for maturation. Throughout Beaune, you can see bottles of Hospices de Beaune being sold under different winery labels.

Because this was a last-minute trip, I didn't manage to arrange for a special winery visit, not to mention that our trip was smack in the middle of peak vacation time for Europeans, even winemakers. Many of the smaller wineries were closed.

Imagine my delight when I found that Maison Joseph Drouhin has a cellar and tasting tours in the town square. A long-time fan of Oregon's Domaine Drouhin Pinot Noir, I could hardly wait to tour the mothership and taste the Burgundian juice.

The tour started in the cellar of the Duke of Burgundy's Parliament building where we got acquainted with a wine press from 1570. It is apparently still useable although not very efficient compared to modern technology. How cool is that? Maison Drouhin uses it only to mark special vintages.


The tour takes you through an elaborate underground labyrinth. If walls could talk, the ancient cellar would have many fascinating stories to share from Roman times to World War II. In some parts of the cellar, there is evidence of Roman presence in the herringbone-style stonework on the wall. You will hear about facades in the cellar which were deliberately strewn with spider webs to hide wines from the Nazis. You will even hear about how Maurice Drouhin (who ran the Maison during the war) hid in the cellar and then at the Hospices de Beaune as he was wanted for being part of the French Resistance. He thanked the Hospices by gifting vineyards, of course!


The tour ended with a generous flight of six wines. three white and three red: 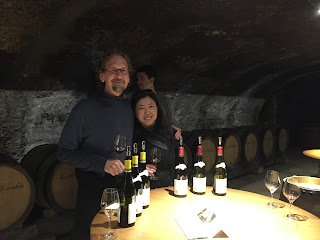 (I lied. The tour truly ended with a half case of Drouhin to be shipped back to Seattle.)

Tip: If you plan to ship wine back to the United States, you don't have to pay VAT, which is a hefty 20%. Use it to pay for shipping instead.

As mentioned, Beaune has no lack of Michelin star restaurants. It is hardly surprising as they do pair well with the world's most celebrated wines. If you can't partake of the many gastronomic pleasures Burgundy has to offer, you have to at least try the namesake dishes, Escargots à la Bourgogne and Boeuf Bourguignon. The two versions below were from Le Cheval Noir.

Although technically not a Michelin star restaurant, Le Cheval Noir is granted the status of Michelin Plate, which means good cooking. I have to say that the escargots from Le Cheval Noir were probably the most inventive I've ever had. The shells were so soft and lightly fried that you could eat them, like soft-shell crabs. As for the Boeuf Bourguignon, there are so many different versions out there, all delicious in their own ways, that you may be inclined to try a few.


We did however get into a Michelin star restaurant, Le Carmin, on our last night in Beaune. My sea bream with tomatoes was absolutely delicious. But nothing delighted my husband more than the chariot de fromage, from which he got to choose a few ounces of different cheeses to enjoy. (I called that the cheese dim sum.)

For a town where good food and wine is so much of its soul, it is not surprising that Beaune farmers market is thriving and extensive. Should you be in Beaune over the weekend, you don't want to miss this.

Located in the town square and operated on Saturdays only, you can see shoppers chattering excitedly with vendors amidst bountiful produce, fresh and cured meat, cheeses, and breads. In addition to gastronomical delights, there were artisanal and commercially-produced quilts, hats, bags, umbrellas, and clothes to get you ready for French country living.


My Verdict: Having visited different wine countries in the United States, Chile, Spain, and France, Beaune is currently my favorite. It has a small-town feel and is welcoming of visitors. But it is by no means a tourist trap. People go to Beaune to eat, drink, and have a good time. It will be great to brush up on some French, but there are enough people who can speak English to help you get by. If possible, research the wineries and make contact before you visit. The high-end ones are impossible to get in if you are not "in the industry." But when in doubt, Drouhin is a really good winery to visit. Santé!
Posted by Adrienne at 6:34 PM No comments: