Last October I posted about my first winemaking experience; well at least from crush through the primary fermentation and press. That was probably the most involved part of winemaking, when twice to thrice-daily punchdowns took place with constant measuring of temperature and Brix. That was when the juice was transformed from 'must' to wine as sugar got fermented into alcohol and carbon dioxide.

After the press, we moved into secondary fermentation of the wine in air-locked vessels. We used a 5-gallon glass carboy and three gallon jugs to use for top-up (I'll get into that later). This period was generally uneventful and less involved, but there were a few things that required attention.

Controlling the temperature. Malolactic (ML) bacteria, which was added to the juice the day before press, were quietly converting tart-tasting malic acids into fuller-bodied lactic acids. ML bacteria are sensitive to numerous factors (e.g. pH, SO2, and alcohol levels), but the one thing that worried me was my ability to keep the wine within the optimal temperature range (>70 degrees). The carboy and gallon jugs were wrapped in blankets, snugged in cardboard boxes, and gently warmed by a heating pad. My biggest fear was stuck fermentation since there were no easy tests to perform at home or measurements to track progress. I resorted mostly to prayers.

Racking, racking, racking. Even though most of the solid remains of the grapes and yeast (also known as pomace or marc) were removed during the press, there were still some remaining in the wine as it went through secondary fermentation. These are called the lees. Decomposing yeast in wine could cause off flavors. In order to remove the lees, we did multiple racking of the wine during secondary fermentation. Racking is the process of siphoning wine off of dead yeast into new containers.

We siphoned a total of four times; the first time was 24 hours after press, the next two were a week apart, and the final one was a month out.

Racking also has two other advantages:

It is important to note that you will lose wine during racking due to spills and as you avoid siphoning lees. The loss of wine during racking may increase the air space between your wine and the airlocks. You can top up the carboy with wine from the jugs or similar store-bought wine (preferably same varietal and AVA). Alternatively, you can add sterilized marbles into your containers to raise the wine level. I personally put some of my top-up wine into a sanitized plastic container, squeezed out as much air as possible, and capped it. It worked! 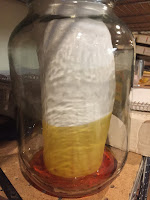 Once the wines had passed all the tests, they were ready to be bottled. We got the bottles that we have saved up, cleaned, and sanitized. (We recycled bottles. If you buy new bottles, you can skip the above steps.) Sulfites were added to the wine just before bottling. Sulfites are a preservative and will keep the wine fresh. They are also anti-oxidants and will protect the wine from oxidation.

Finally, five months after harvest and crush, our first vintage was bottled and proudly named Abscession - a joke, as my husband was recovering from an abscess the day of the harvest. Special kudos go to my partner-in-wine, Alisa. That's her work on the label, making an access look classy. The wine will officially be released in the summer, so check back later.

My Verdict: I am having so much fun learning about winemaking. It gave me a greater appreciation for wine. I don't think going commercial is my calling, but I'm planning for my next vintage already!
Posted by Adrienne at 10:06 PM No comments: