Kim Brady of Brady Cellars - From Technology to Oenology

Washington winemakers come in all shapes and sizes! Some come from generations of winemakers like Christophe Baron of Cayuse, some hail from Napa Valley like Todd Alexander of Force Majeuer, and then there are those who have taken a leap of faith from technology to oenology like Microsoft vet Marty Taucher of Avennia. I happen to know a few folks from this last category, and they vary in their levels of success.

The truth is that being a successful winemaker is no small feat. The Washington wine industry is highly competitive and has over 800 wineries. One of my favorite Washington wines comes from technologist-turned-oenologist Kim Brady of Brady Cellars.

Our neighbor invited us to Kim's release party a few years ago. Having tasted novice attempts by other technologist-turned-oenologist friends in the past, I was skeptical. But I was surprised and very much delighted by Kim's first commercial release. His 2010 Cab was delicious during the tasting. Over time, it has aged so nicely that I persuaded him later to sell me one of his remaining six bottles, which I still have in my cellar.

Thankfully, Kim did not turn out to be a one-hit wonder! The vintages that followed the initial commercial release continued to showcase his talents in winemaking. His line-up has expanded to include dry Provence-style Rosés, beautiful Bordeaux blends (called 'Symphony'), amazingly complex Merlot, and my latest favorite, Grenache. 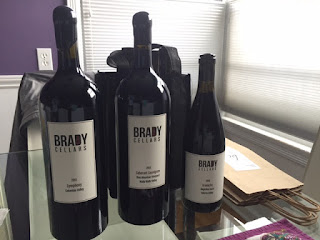 Kim credits his achievements to experienced winemakers (such as Tim and Kelly Hightower of Hightower Cellars and others), who have advised and guided him even before his first commercial release. He even had a chance encounter with Mike Grgich (famed winemaker of the 1973 Chateau Montelena Chardonnay that won the Paris wine tasting) and ended up helping at the Grgich Wine Estates for a day.

Last weekend was Brady's 2016 Spring Release Party, hosted at the lovely Wingle Residence in West Seattle. (The Wingles are wine club members.) Like prior parties, Tyler Palagi of Radiator Whiskey whipped out all kinds of carnivores' delights, such as charcuterie, brisket with horseradish cream, and pork belly, all of which paired wonderfully with Brady's wines. The line of tasters kept Caroline, the winemaker's wife, busy pouring. Another successful release party indeed!

My Verdict: While it is not easy to succeed as a winemaker in this very competitive market, I am certainly glad that this technologist has made the transition to winemaking. I don't say that to just anybody. Here's a nod and a toast, and I look forward to more vintages. Cheers!